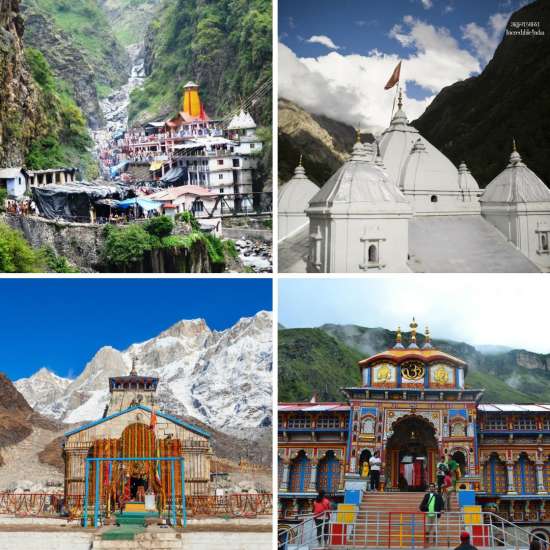 Morning our driver will pick you up from Haridwar Railway station /Bus stand and drive to Barkot enroute visit Kempty fall.On arrival check in at the hotel.Dinner and overnight stay at the hotel.

Early morning after breakfast drive to Jankichatti / Phoolchatti & star trek from here to Yamunotri (6kms) (Either by walk or by horse or by Doli at own cost). After taking bath in Jamunabai Kund’s warm water and having “Darshan” of “Yamunaji” return to Jankichatti by trek. Later drive towards Syanchatti, Dinner and overnight stay at Barkot.

Morning after breakfast check out from the hotel and drive to Uttarkashi.On arrival check in at the hotel.Dinner and overnight stay at the hotel.

Uttarkashi is home to a number of ashrams, temples. The name of the town reflects its similarity to and location (as north of) the city of Kashi (Varanasi). Similar to Varanasi, town of Uttarkashi is also situated on the banks of River Ganga.

Early morning after breakfast drive to Gangotri, enroute at Gangnani take a holy dip in Garam Kund, further drive to Gangotri via beautiful Harsil Valley. Harsil is famous for its nature beauty and for the majestic views of the Deodar trees and mountains. On arrival at Shree Gangotri, take a holy dip in the sacred river Ganges which is also called Bhagirathi at its origin. Perform Pooja and Darshan, after that relax for some time in the lovely surroundings. Later drive back to Uttarkashi.Dinner and overnight stay at Uttarkashi.

Gangotri Temple: The temple was constructed by the Gorkha General Amar Singh Thapa in the 18th Century, is situated on the right bank of Bhagirathi.

Morning after breakfast, drive to Guptkashi Enroute you can see the beautiful river Mandakini at Tilwara. The Mandakini river comes from Kedarnath, drive alongside the river to reach Guptakashi, visit Ardh Narishwar Temple in Guptakashi. Check in at the hotel arrival in Guptakashi. Dinner and overnight stay at Guptakashi.

Morning after breakfast proceed for Kedarnath & back your hotel. Dinner and overnight stay at Guptakshi.

By Helicopter: Morning our driver will transfer you your pre-book Helipad. After Back from Kedarnath.Our driver will drop you at Hotel for rest.

Morning after breakfast,proceed to Guptakahi and then drive to Joshimath via Pipalkoti,.On arrival check in at the hotel . Dinner and overnight stay at Joshimath.

Morning after breakfast, drive to Badrinath. On arrival after having a bath in the Taptkund have the Darshan of Badrivishal and spend sometime near the temple. Brahamakapal is significant for Pinddan Shraddh of ancestors (Pitrus).Dinner and Overnight stay at Joshimath.

Morning after breakfast,bid farewell to your Char Dham tour and drive for Haridwar via Rudraprayag and Devprayag where the Confluence of Maa Alaknanda and Bhagirathi which forms Maa Ganga.